People sometimes worry that ‘coaching’ needs to take a long time. Here is a quick tip for something to try next time someone pops their head in the door and asks you to solve an issue they have… 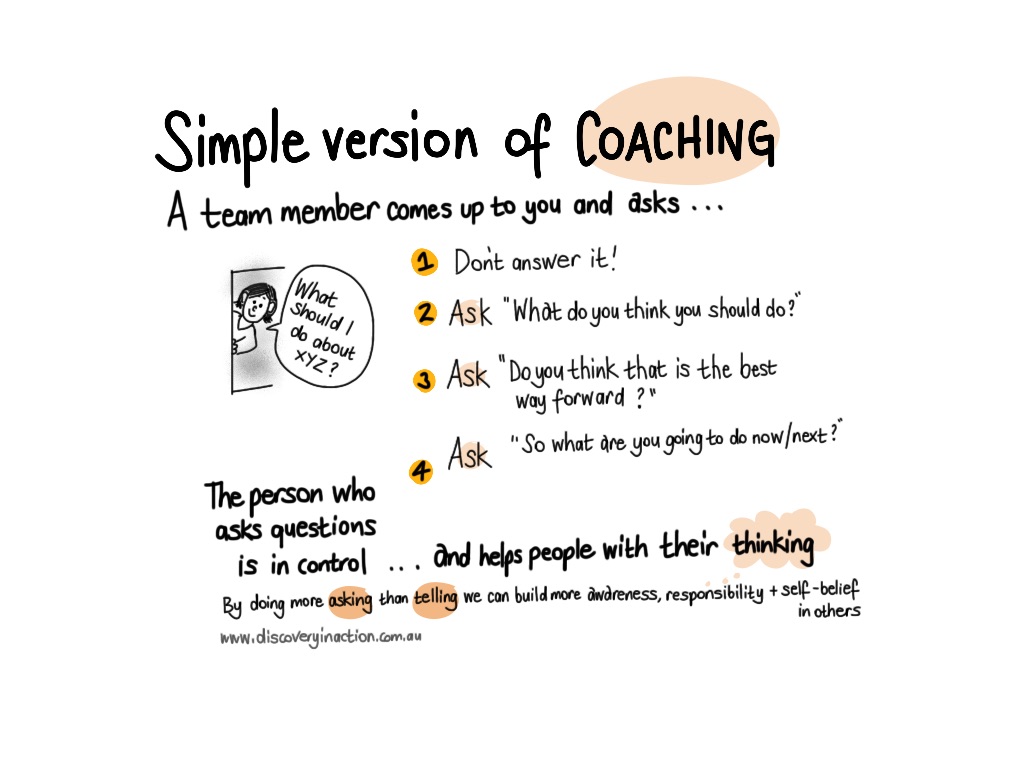 We were recently co-facilitating a coaching workshop for a group of managers – developing their skills and knowledge in coaching in the workplace using the GROW model of coaching.  Early on in the workshop a couple of participants raised some doubts as to how coaching would work in their organisation: We work in a fast paced environment where our staff need quick answers to questions; Numerous times throughout the day my staff come to ask me what we should do about this or that and expect an answer – I’m not sure we really have time to ‘do coaching’.

However, if we understand coaching as being about helping people to sort through their own thinking (because the answer often lies within them) and to take ownership of their choices and actions then coaching can be applied in straight-forward day-to-day interactions between Managers and their staff.  It got us thinking about the application of coaching in these sorts of situations.  In fact it prompted Paul to recall when he first started out in his career and a situation where he handed his manager with a set of work papers he had prepared for his review and he simply asked:

Well, that really stopped Paul in his tracks!  He said he suddenly felt a greater sense of responsibility for his work and to not assume that the manager would  fix any deficiencies in the work.  Paul took the work papers back and did a thorough review of his own work before giving it back to the manager.

So taking that idea a bit further and thinking about the typical scenario where a staff member comes up to you and asks ”What should I do about XYZ?” where you know full well they probably have the ability to work it out for themselves, you might try this:

Its only taken a moment or two but it is coaching – you are developing them; increasing their capacity to make decisions; building their self-belief; and pushing them to take responsibility and ownership for their choices.  Over time you should also reap the benefits – your time is freed up because they are dealing with questions and issues themselves and becoming more capable.

We’ve developed a simple one-page info-visual that captures this idea. Click on the visual above to print yourself a copy.

Click here to see our other blogs on coaching and the GROW model, and here if you are interested in our Coaching Skills program.