Radical Candour – do you really care for and challenge your teams?

Radical Candor™ is a simple 2 x 2 model that asks leaders to both Challenge their teams Directly and show they Care Personally at the same time.

Many leaders struggle with providing effective feedback to their team members. Some are too blunt and leave the person feeling defeated rather than inspired to work on something that can help them to be their best. Others are fearful of hurting someone’s feelings and decide instead to take the seemingly easier route and tolerate unsatisfactory performance. And then there are people who are frightened of the response they’ll get, and avoid providing feedback all together.

As we’ve shared in previous posts on providing feedback, ‘can I give you some feedback?’ can be 6 of the scariest words in the English language!

And yet our team members deserve to know

a) what is expected of them and

b) how they are performing

Feedback should be given for two purposes:

Can you really challenge and care – can these concepts co-exist?

This concept is taken a little further with the Radical Candor model, as it explores that to help people to be their best, you need to challenge them directly, but do so with a deep care for them as a human being.

The purpose of feedback is to help people to succeed and it is therefore one of the core responsibilities as a leader to:

The radical candor model encourages providers of feedback to be:

Here is a quick visual of the radical candor model: 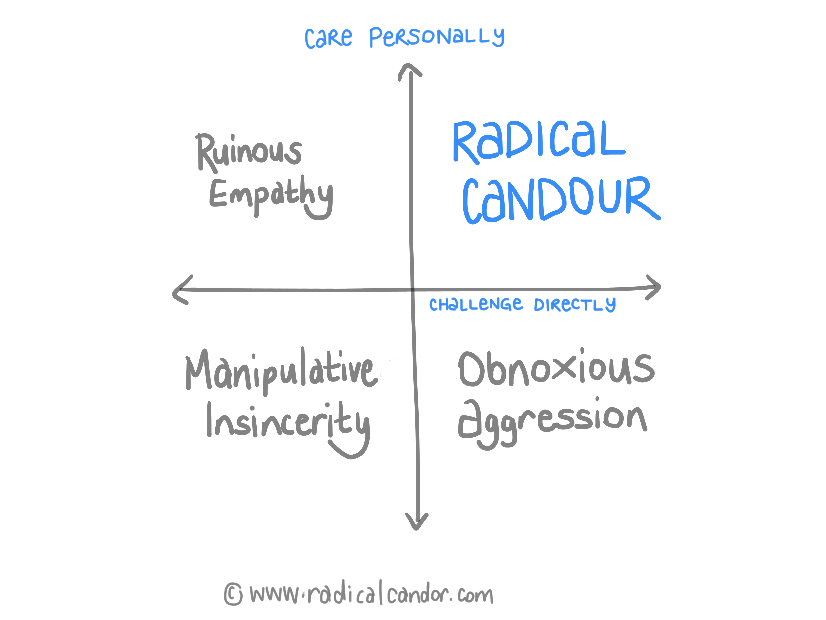 Click here to access the ‘Radical Candor’ website which has loads more information on how to apply it, and a great video by co-founder Kim Scott sharing stories about its evolution and application.

And thanks to my recent DiA Learning circles groups for drawing this model to our attention!