I was recently working with a coaching client who, as a relatively new leader, was finding himself in meetings that had a familiar pattern to them. These meetings would typically be characterised by someone expressing an opinion or view on a certain topic, then another party would disagree and present a counter-view. This would go on for a few cycles with no real progress or decisions being made. Worst still the conversation would result in some bruised relationships. My coaching client was struggling to think about how he might play a role in such situations to get a more effective outcome.

Unfortunately, this is not an unusual or unique situation. This is a scene that plays out in meeting rooms across offices everywhere. Some might even describe this as merely ‘healthy debate’ – the intellectual challenging of ideas. However, this is rarely so when people have no intention of being open to other perspectives – rather it is a ‘dig your heels in, fight to the end’ debate with a winner and a loser.

In such situations, particularly when you are not the ‘authorised leader’ in the room, many ‘bystanders’ will simply just want to avoid the discomfort either through not participating in the discourse – I don’t want to rock the boat, It’s not my problem, they’ll work it out – or by attempting to close the conversation down – can we move on and take this off-line, let’s defer this for another meeting.

Real leaders, however, will walk to the flame and embrace the discomfort. This is what my coaching client wanted to do – he wanted to ‘step up to the plate’ but wasn’t quite sure how to do it. My client was at least asking himself a key question (and a very powerful question): How can I help this conversation along? This was not about him, it was about how he could help a group of people to have a better conversation. An admirable intention for a real leader. He was, however, just unsure about what this might look like in the moment (with the attendant ‘heat’ in the room).

So, what does walking to the flame look like? Well, firstly there is the mindset you’ll need to hold. The key elements are: 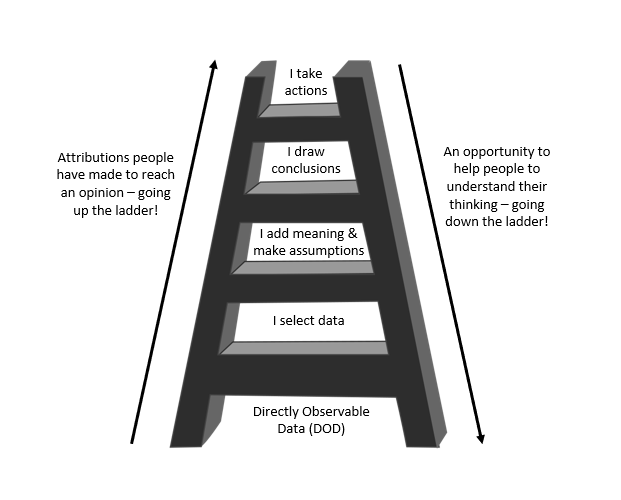 So, with the above mindset and the ladder of inference framework in mind, walking to the flame in practical terms means (once people have expressed an opinion or view) asking questions such as:

These types of questions are merely intended to keep the possibilities open long enough to generate deeper shared understanding before accepting someone’s view of the world as fact and enable a more productive conversation.

Walking to the flame is the act of a real leader.

So, how did it end up for my coaching client? He experimented with this approach and witnessed a fundamental shift in the conversation resulting from his intervention. ‘Empowering’ is how he described it.

Do you have the courage to walk to the flame and be a real leader?